“Whatever else happiness may be, it is in neither having nor being, but in becoming…”

So how are your New Year’s resolutions coming? Have you yet re-solved to have more resolve, as the root of these states of being is ‘to loose and to let free’ a way or a something; it’s a way of detaching and washing away.

I’ve been thinking about the difference between a promise – to others or to self – versus a commitment.

Which would you rather have, whether from self or from others, in this Life-time moment of your journey? A commitment or a promise?

Both promise and commitment come from the same Latin root as well: mittere,   which is first ‘a mission’, a sending or dispatching on a highly important journey often of a sacred sort.

So far, a promise or a commitment, both sound pretty good.

Our life-journeys, becoming a shining Best of who we each are, on task and on purpose, are a highly important and yes, even sacred journey. That we call it our life, or life-time, is just a reminder that the clock is ticking on this, our journey, whether we plunge into it with joy, commitment, promise, resolve or hesitance.

But for some reason, I’ve been feeling like all the ink on ‘promises’ is usually followed with a sense of ‘in the future’… as in I promise to … whether it’s ‘to have and to hold’ for an indeterminate time, or a promise to stop doing something destructive,  or a promise to accomplish something, it feels like we are setting our promise in the future.

And yes, I know many also speak of God’s promise, and know it is not just now but for all time, so that’s set into the eternal now and future as well. But I’m not in the business of doubting God or that particular promise; some mysteries are best left mysterious as to ‘when and where’, so I’ve found. Time is relative at the God-level of Creation, I’ve come to learn.

A promise is a mission with a ‘pro’ in front of it — the old Latin root, pro as in ‘forward’.  No wonder when we make promises to ourselves or others, we have a sense of it being a future event, whether it’s starting from now on or, well, maybe, tomorrow.

Check your New Year’s resolutions – did they start with a promise of when they would start, or with a setting free of last year’s hangover via resolution?

Commitment. It’s a sturdy word. It feels solid when you commit to yourself to do something, or when someone else commits to you and vice-versa. A commitment  feels like it’s already accomplished in some energetic way, as in ‘I commit to this work’ and ‘I commit to living fearlessly and on task and on purpose.’ Doing so feels already accomplished and is indeed already underway as soon as the sentence is over, with no …  after it.

Indeed commitment is a mission with a ‘com’, as in ‘sent with’; it’s to undertake together, and to be entrusted to take a risk with someone or something. It is telling self and others you are trust-worthy; your mission, should you decide to accept it,  whether of your work or your purpose is already undertaken.

Now back to happiness … which one feels when committed. Are you committed to making your life journey, on task and on purpose, as happy — as Yes — as might be possible?

Then let us return to the wisdom of the great John Ciardi, and his astute 20th Century observation:

Yes, happiness is found in the pursuit of becoming …

May your life-time in the coming year reflect your becoming a person who has created your own work and path in life, putting to use your talents and gifts in service of our world, doing the work you are here to do . . . even as you work to create it today!

May this be your commitment to yourself, and to all those around you, cheering you on.  Including me!

Here is the rest of the quote, from John Ciardi’s delightful essay “What is happiness?” from oh so long ago, and still so accurate.

Happiness is never more than partial. There are no pure states of mankind.  Whatever else happiness may be, it is neither in having nor in being, but in becoming. What the Founding Fathers declared for us as an inherent right, we should do well to remember, was not happiness but the pursuit of happiness. What they might have underlined, could they have foreseen the happiness-market, is the cardinal fact that happiness is in the pursuit itself, in the meaningful pursuit of what is life-engaging and life-revealing, which is to say, in the idea of becoming. . . .

Blessings on your day!

You have a specific reason to be here on Earth . . . You have specific Work to do . . . It is Work that uses all of your talents and abilities, on behalf of your concerns and your passions. It is inspired. Your life-time spent here doing the Work you are here to do is needed.

Here's how to contact me for queries regarding coaching, workshops, the book, or to speak to your group. 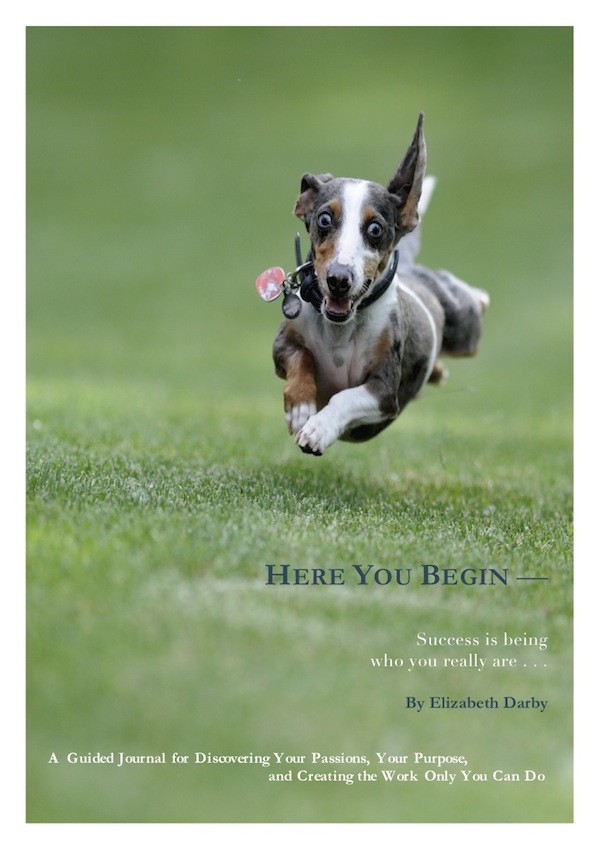 © Elizabeth D. and Here You Begin, 2011-2020. Unauthorized use and/or duplication of this material without express and written permission from this blog’s author and/or owner is strictly prohibited. Excerpts and links may be used, provided that full and clear credit is given to Elizabeth D. and Here You Begin with appropriate and specific direction to the original content.